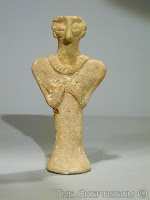 Miraculously yanked back to life from the Plane of Vaporware due to the efforts of Gorgonmilk's Greg and a cast of dozens, the Petty Gods volume is now available for download. My own homage to Children of the Corn and The Wicker Man is by no means the principal reason to get it. Here is an Ogdoad of the most excellent, from which I had to leave aside many worthies, and some ideas for their use.

Best Dungeon Trope God: Jhillenneth, Mother of Horrors (Matt Fischer). She can provide for a whole magical-naturalist monster zoo, and stand as the end boss, to boot.

Best God for a Campaign: Azwa, God of Stone Heads (Garrett Weinstein). The perfect ominous artifacts to scatter around your hexcrawl.

Most Oddly Compelling Worshippers: Lord Downall, God of Drains (Joel Sparks). Just the cultists to fund an expedition down ... down ...

Best Comedic God: Manidono, the petty god of slackers, half-assed effort, and loose change (Erin Palette). Put him in a medallion and pop him out when some party member or another proves worthy of his tutelage.

Best Idea: The Man in the Moon, a petty god who manifests via pareidolia - the perception of faces in random objects (Barry Blatt). Best introduced through a found manuscript proclaiming his existence and usefulness.

Most Astoundingly Obscure God: Mespilus, god of the Medlar Fruit (Chris Wellings). The what? Yes, the medlar fruit. Narrowly beat out Qurgan Quagnar, god of Three-Legged Toads. The punchline to "I believe this artifact has the power ... to summon the very gods!"

Creepiest God: Nazarash the Shatterer (Blair Fitzpatrick). A human skin stretched around a rough assemblage of broken glass. Creepier still: his one and only known mortal worshipper.

Best God Mechanics: Ochlos Volgos, the god of angry mobs (Eric Jones), whose powers snowball as a result of their increasing size and more desperate actions. Surely he has a human believer and instigator, a good catch for investigators or bounty hunters.

Best Folklore God: Whisper Will, Lord of the Crossroads (Dale Cameron). Who knows that crucial piece of information? Only this guy. Now,how to coax it out of him ..
Posted by Roger G-S at 12:30