The Valley of the Four Winds miniatures showed a lot of inventiveness in dealing with some of their "factions." For example, the Pixies had rat riders, a figure carrying a puffball on a "spore stick" (hit to force a Body/Poison/CON save, or paralyzed and infected with a disease which kills in d4 days) and a slingshot-like catapult, which probably needed a rubber band and some kind of missile to model correctly:

You can treat this weapon as a normal sling, perhaps, with +2 to hit owing to the direct aim and fixed pivot.

The Pixies' foes, Forest Orcs, didn't quite work for me with their chainmail onesies:

If the Orcs had beards, the dwarfs definitely reversed roles even further, with no beards themselves but all manner of weird noses and animal-like snouts: 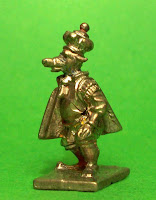 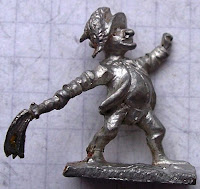 In particular, Dwarf King Gondemar (on the left) has me thinking about the one-of-a-kind "funny animal" character in fantasy ... Snarf, Cerebus, Howard the Duck. How many campaigns dare to include such a nonesuch adventurer with a backstory nobody dares ask?

Now, the best developed  Four Winds minis were the skeletons, which I'll venture to crown as the top set of skeletal miniatures ever devised. Modeled after Breughel's Triumph of Death, the undead horde made a most impressive parade, as assembled for this grainy White Dwarf magazine ad:

Not just the bell, but gibbets, reapers, skeletal cavalry and death wagon, coffin bearers, skeletons menacing the living, Spanish-style penitents in pointy hoods, skeletal monks in hooded robes. And not just skeletons, but monk-robed wraiths, witches, dancing demons and imps, and the devils, Beelzebub, all dressed up for a witches' sabbath ... 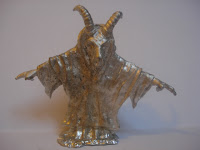 Few lines of miniatures captured the obsessions of pre-modern folk beliefs as accurately. Even their crudeness of sculpting, in a way, brought the Four Winds series into line with the bas-reliefs and daubings of the Middle Ages themselves.

Next: Closing out with the Grand Wizard, the Swamp Lords, and information on the resurrection of the miniatures line.
Posted by Roger G-S at 22:45