As promised in the last critique, let's take a look at how Michael Curtis' Stonehell megadungeon works with creativity, meaning and description. 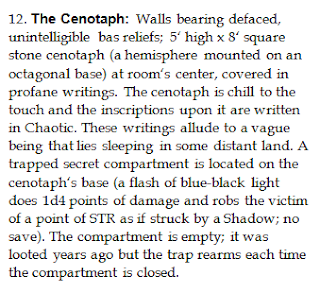 This monument is a minor climax to a thematic series of rooms that started with a feeling of evil and then presented the classic skeletons rising from the bones to attack. This is how you do a picked-over secret compartment! The description wastes almost no words. Not so much an anticlimax as an antEclimax ... a minor mystery appropriate for an underwhelming area, hinting at undeveloped vistas. 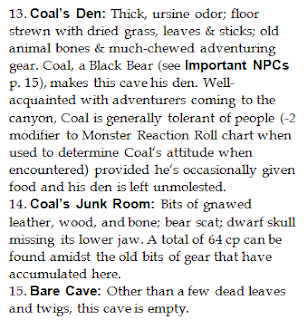 The friendly bear is a good hook, especially as developed elsewhere in the book as a kind of dungeon legend/good luck sign. The only false note: 64 cp, that doesn't sit well with the bear's habit of bringing up things to gnaw on. (Question that low-level penny jar every time!) Better cheap treasure: leather strap with silver buckles. The empty cave is less empty than it seems, a pretty obvious temptation to camp in case the town is too far or too "hot." "I've got some outdoor caves and I'm going to put outdoor critters in them" part 2. Here, too, there is meaning soft-pedaled below the surface, a story that's almost told. What happened to the hermit? The brigand? Does knowing about the mad hermit and his pet puma in Keep of the Borderland help clarify things? That's a nice touch, if intentional. The scarf is maybe one detail too many - everything else invites use.

Compared with the last examples, it's clear that Stonehell aims for less but delivers more. There's no need to spell everything out, and themes are possible but subtle, rewarding exploration in nice ways.
Posted by Roger G-S at 12:30