Rather than pages and pages of monster listings, my 52 Pages rules try to deliver concise novelty by giving rules and examples for generating monsters. This is the second example of the three pages dedicated to that (also: humanoids, and forthcoming, monsters). 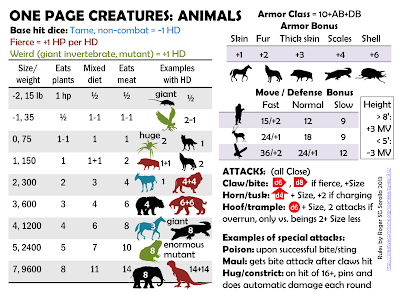 It turns out that the classic Original/Basic/AD&D Hit Dice for animals are fairly accurately keyed to a doubling scale of their weight, with a few exceptions. So, you can use your own impressions about how big an animal is relative to the examples, or look up the facts on Wikipedia.

For example, the idea of an "800 pound gorilla in the room" that has passed into cliche, actually grossly overestimates the weight of one of these gentle, herbivorous animals, who in the wild occasionally are as heavy as 500 pounds. So a real gorilla by this scheme would have 2 HD, or 3 for a leader, far below AD&D's estimate at 4+1.

You could get partway there by making them Fierce (so leaders are 3+3). But actually, Dian Fossey's gorillas bear no resemblance to the monster of early 20th century imagination, whether found in jungle pulp or Hollywood junk. For that D&D has the carnivorous ape, whose 5 HD are about equal to my scheme's 4+4 for a fierce, meat-eating gorilloid. 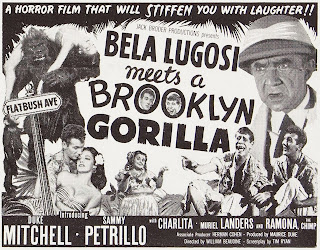 Ummm ... A gorilla bear, if you must have one, would probably be a fierce, 600 pound mutant omnivore, so 5+5 hit dice. I hope all the gorilla bear fans out there are happy.
Posted by Roger G-S at 12:30