Ben Robbins' "story roleplaying game" Microscope is actually more like a writers' workshop exercise - but a very good one. It's a structure for a number of people to narrate a history within a given genre, with a definite starting and ending period. There are good rules for making the premises fresh (actively including non-cliched elements and excluding select cliched ones - I really appreciate this), for ensuring that everyone gets to contribute, and for working through detailed scenes in which small slices of the history are role-played out.

The end result - if somebody were taking dictation of the play - would read something like the Old Testament or Silmarillion: a succession of broadly described historically important events, punctuated by small, vivid, significant scenes. During the game, I found myself thinking of the "periods" level of detail as a timeline: 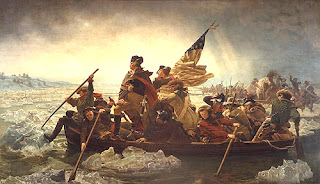 and the "scenes" level as historical pageants expanding on the stories implied by the paintings. The rules also ensure a certain amount of continuity across eras, as players take turns developing specific characters or themes in multiple settings.

One great use of Microscope is as a campaign session filler when there isn't a quorum to adventure; similar to playing out a contemporary NPC scene, the few players who have showed up can help develop the legends and known history of the world they live in. In this case, my campaign's elf and dwarf players worked with me to tell the story of the rupture between the elven and dwarven inhabitants of the Olbestaum, a large area of wooded mountains, and the migration away of the dwarves. About 200 minutes of play yielded the epic tale of a great underground tree that became the symbol of dwarven-elven cooperation in arts and technology, then was corrupted by a misguided attempt to break the creative stagnation that descended on the Olbestaum, involving the sacrifice of the first and only half-elf, half-dwarf child. The motivations, misdeeds and eventual destruction of the villains played out in a half-dozen scenes or so, with players taking shifting roles. As DM I subtly pushed the story toward establishing a perilous underground adventure setting around the ruins of the Tree and of the city built above it, now infested by horrible demons but brimming with the fallen treasures of the city.

If I have one criticism of Microscope it's that there are some mechanisms that seem unnecessarily complicated. For example, we ended up just ignoring the micro-level "push rule" about how to play scenes, leaving only the goal of answering a question in the story, scene setting and character thoughts, and the process of choosing and excluding characters. We figured that if there were serious disagreements about the tone or plot of a scene we would just take a vote and move on. Perhaps the push rules are there in case of a less congenial set of players, but I'm of the mind that cooperative games should assume a certain amount of, well, cooperation and good intent.

I also didn't get the reason for the mechanism of Legacies, in which players champion a particular plot element persistently throughout the game. It seemed that continuity was adequately provided by the Lens/Focus rule, in which each round of adding to the story centers on a particular theme. If players have particular interests or obsessions, they will emerge naturally as additional threads. Including Legacies just seemed to delay and complicate the otherwise very natural sequence of a round.

Overall, though, the game is well worth the ten Yankee dollars for a pdf. Another plus: because the rules are geared toward respecting the creative contributions of each player, it seems a particularly good story/indie game for including less assertive players, who can make other kinds of GM-less games a little awkward.
Posted by Roger G-S at 09:10