Is the Dungeon Master Your Cleric's God?

Clerical magic in D&D - pre-memorized, predictable, healing-heavy - strikes a lot of people as not quite right. I've covered this ground before, but in thinking how the final 52 Page Prophet class should work, a few things are still not clear to me. 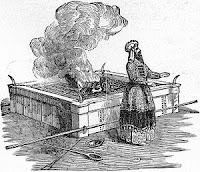 What is clear: a need to move from a standardized list of "miracles" to a list of choices, so that players can be druid (or Franciscan) nature priests, healers, abjurers, diviners at will: the same kind of choice that wizards get.

What is also clear: having a separate module for hit point restoration, as I do currently, is good. It means miracles aren't short-changed for healing, and because it's presented as confidence rebuilding rather than actual physical healing, it can be farmed out to composite classes like bards or commanders.

What is less clear: how clerical magic should be different from wizard magic.

Some follow an intuition that clerical magic should work less predictably: basing it on a turning roll (Talysman's way) or some other random roll (Brendan's way). Currently in my 52 Pages, for prophets, one miracle is free and you keep getting miracles as long as you make a Mind save.

Others go farther and insist the clerical magic should involve developing a relationship with a divine agency. The first edition AD&D Players Handbook started this trend, basing clerical spells of high level on good behavior, and being even more harsh toward the paladin. Dungeon Crawl Classics has not only the cleric, but the wizard, dependent on the favor or disfavor of a supernatural entity. Under these rules, the cleric-type should behave in ways approved by the god. For following these strictures they get rewards and for ignoring them they get punished.

So, when I last turned my thoughts to this, I came out on the side that clerical magic should not just be random, but should reflect a relationship between cleric and a free-willed deity- much like the one between any other character type and their trainer or mentor.

There are three problems with this, though, as I've realized lately:

1. As with my old observations on alignment, I never had the urge to turn that observation into an actual system, or to play that way - which should be telling me something. The shocking things that you'd think might happen if you just let cleric-type players do their thing, don't actually happen in my experience. Mostly, they either act up to the pious standard, or present a cheerfully helpful healing service to a venal expedition. Letting them be wild and erratic-seeming "prophets" rather than staid "priests" helps, somewhat.

2. I have no desire as DM to be treated as a god - yet that is exactly what happens when you start acting out the relationship between deity and worshiper. I suppose for a player who wants to take on that challenge, I could oblige, just as I take all the myriad roles of the world. But to make it a mechanical requirement of the basic functioning of a character just seems wrong. Although social relationships may be important to some individual characters, I want to give players the freedom, always, to take or leave those relationships.

3. Finally, subjecting the divine relationship to rules, even random ones or player-skill ones, is a kind of theology that leads to bad, ultimately unsatisfying consequences. Let me explain ... but next time, where I'll also consider what would happen if you did have a cleric-player who took their character very much off the rails.
Posted by Roger G-S at 12:30