Swords AND Wizardry: Together At Last

I didn't really know what to post for the Swords and Wizardry Appreciation Day, because most of what I write recently has been for any old school systems with Hit Dice, levels, Armor Class, d20 hits and saves. Even though I did write my first supplement, Varlets and Vermin, for S&W. So I kind of stood back from the whole blogroll thing.

I suppose that this is a world where some people actually got upset when it looked like Dwimmermount was going to be produced only for ACKS and not for Labyrinth Lord or whatever. So I could hoist the banner of edition war and proclaim my love for Basic and its clone children and my own hybrid Basic/3rd Ed/Flame Princess spawn.

Instead I dip it in tribute. A salute to Swords and Wizardry! 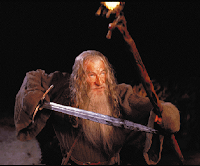 Seriously, no armor, hit dice of a scrawny kobold, and you get upset about some wizards wielding a sword and barely able to hit with it because they might evolve into the ultimate GITH MACHINE? Well listen, I know some of these WIZARDS OF THE SWORD.

There are two orders of them locked into eternal struggle. The RED SWORD wizards need to kill something with blood in it every day with their sword before they can cast any spells. The hit dice of the strongest thing they kill determines the highest level they can cast that day, except things that are killed as sacrifice (like a cow or something they buy) count only at half hit dice. If they kill something bigger later in the day they can open up the memory of those high level spells. These are the bad guys but fun to play if you like picking fights. They get to wear chain armor but can only ever use the sword to fight.

The WHITE SWORD wizards are the other way around. They can only start using their sword once they have cast all their spells, using their blade as a kind of magic wand or holy symbol. If they spill blood with it, their spells start to go into the victim and give the victim back 2 hit points per spell level until fully healed. Matter of fact, if you need really inefficient healing that can kill you before it makes you better, these guys are your huckleberry (they can pull their sword blow to just do half damage, but still). These are the good guys, they can't wear armor and can only ever use the sword to fight.
Posted by Roger G-S at 12:00