Experience Points: Is This My Final Answer?

Okay, after all this discussion, here is the solution I can best live with, done up in One Page format. 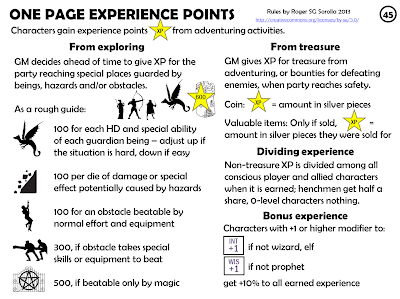 The trick is to link XP to monsters, but then associate them not with killing the monster, but with reaching a certain location. This is similar to the technique of placing treasure with value relative to the monsters you might meet on the way, and has a lot of benefits.

Unlike XP-for-treasure-only, it rewards doing other things than finding treasure. Climbing a mighty mountain, clearing a fortress of ghouls, or riding with a caravan to a far-off city now can have their own rewards.

Unlike XP-for-monsters, it:
Unlike the straight XP-for-exploring idea, it:
The other ideas I've been using in my games, to generally good effect. Missing, yes, is carousing; but I have some room on my Settlements page I'm going to use to put forth a general money-for-xp+random effects procedure.
Posted by Roger G-S at 11:19