The spirit of Hieronymus Bosch was flexed in the Valley of the Four Winds miniatures range with the Grand Wizard, the dourly ascending fellow below, and his bizarre minions. 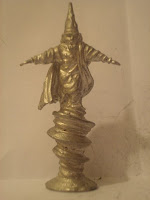 These two charmers are possibly the only known miniature castings of the gryllus monster I wrote about in the fall. Seriously wanting one of these!

Among the other Bosch-inspired oddities are this old woman changing into fire - probably a glass cannon-type monster, 1 HD, AC 9[10], unarmored, if it gets into close combat range starts burning for 2d6 damage/round. Or, scarier still, she changes into a small fire elemental when "killed"? 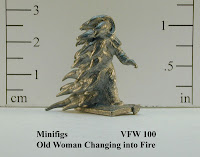 And, of course, the giant, human-faced Cock O' Doom and its Faceless Rider. 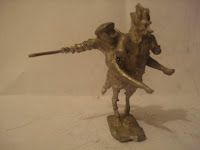 The Cock looks to be about a 4+4 HD critter, AC 6[13], MV 18 or 15 with rider, pecks for d8. It can crow at will, creating a magical fear effect within 60' (make a Will/Spell/WIS save to be immune henceforth). If the crowing happens at the exact moment of dawn, the effect is death instead. The Faceless Rider is either an unseen servant decoy, or a spectre. Bet you wish you knew which.

The only figures in this line I actually owned, and painted with lurid aqua skin, gold ornaments, and magenta loincloths, were the Swamp Lord minions. These cruel, frog-legged creatures liked to decorate with severed heads. The one on the left is also carrying a head-shaped bowl and no prizes for guessing what goes in it. 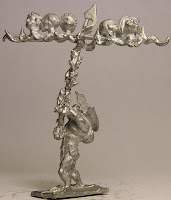 Stat-wise, they seem best represented by sahuagin, with the breathing apparatuses on their backs allowing them to range overland for extended campaigns. If struck from behind with an odd numbered damage amount, the aerolungs are damaged, and the Swamp Lord loses morale and beats it back to the nearest breathable water.

Before closing out this series, I also want to say that in the past month or so, many of these figures appear to have been recast and are on offer from Minifigs. These are mostly Swamp Lords but you might miss their more extensive offering of Four Winds skeletons on a different page. Perhaps with more purchases, more figures will go back into production?
Posted by Roger G-S at 22:36